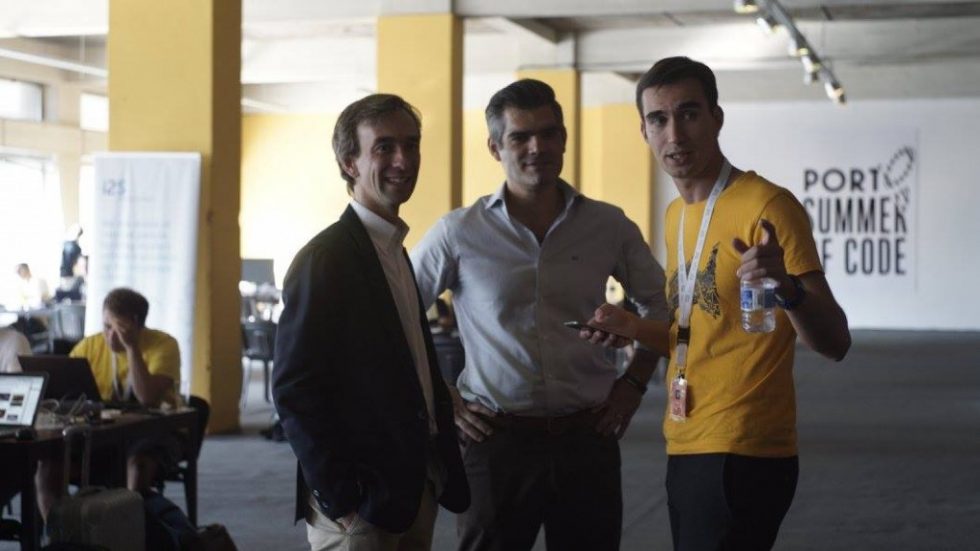 This year’s, Porto’s biggest programming marathon received more than 120 participants, showing an increase of 100% over the previous year. The organization worked dynamically, with an environment-friendly creativity in order to transform the 3rd floor of the “Palácio dos Correios” in a welcoming and creative space, with the required conditions needed to receive the participants. The result was memorable.

There were participants from every corner of Portugal. Most of them were students as well as professionals from several areas related to Engineering, Computing, Electronics, Computer, Management, Marketing and Medicine. They formed working groups and developed projects for three days and were supported by mentors, excellence professionals, that guided the participants during the competition. PSC provided all participants direct contact with some of the best technology companies in the national and international scene as Cisco, Doist, GitHub, Wit Software and many others.

Despite all the hours of hard work and learning there was also time to attend workshops, with some lunch breaks, dinner and video games.

Sunday afternoon was marked by the presentation of the 19 projects that reached the final stage of the competition. The jury, composed by Claudio Gamboa (member of Pixels Camp organization), João Faria (Director of the Master in Informatics and Computing Engineering FEUP), Paulo Calçada (CEO at Digital Porto), Paulo Correia (Technical Solutions Architect at Cisco), Pedro Abreu (Professor in the Department of Computer Science, University of Coimbra) and Rui Neves (President of AlumniEI-FEUP), remained attentive to the projects that were emerging, raising several questions at the end of each presentation. In the end, the four projects that stood out were: Advertly, Good Game, Guitar Chords and B-3.

Although often detrimental for the user experience, adds are usually a project’s only way of financing. The usage of AdBlocking system is becoming more frequent which ends up leading to a drastic decrease in financial viability. This was the purpose that led a group of students from FEUP, consisting of José Melo, Ricardo Loureiro and Rui Gomes, created Advertly. Despite the fact that it does not cancel the add blocking, it provides its users with a simple donation system so that users have the option to contribute to maintaining the service.

The “Team Chokuzan” chose to focus in the video game market with a simple premise: “everyone loves a good game. But what it takes to be a good player?” It was with this idea in mind that Pedro Belém, Rui Fonseca and Tiago Botelho, students of the University of Porto and former students of the University of Coimbra, decided to create a platform dedicated to electronic games in which players with more aptitude offer their time to teach other players. As with every tutoring, players have the chance to clarify doubts and practice while aided by their tutor.

Arsénio Costa, Fernando Nogueira, Pedro Gomes and Waldir Pimenta, former students of the University of Minho, created the Guitar Chords that allows, through interaction with a diagram, to simulate the placement of fingers on a guitar, representing the position of the notes, and simulate the sound of them. By using these multiple diagrams, consecutively, it is possible to reproduce the sound generated by the key notes and export entire/full songs.

The B-3 team, formed by Francisco Couto, Mário Ferreira and Pedro Sousa, students of FEUP, presented a visual bug tracking mechanism. Often times, developers struggle to understand issues or bugs that users face. By providing them with a set of tools that allow them to provide a simple screenshot, the user can easily pinpoint the problem found. The tool also gathers information such as the version of the browser or operating system which is all bundled up and reported to the development team. Everything is bundled up and an issue is created on the product’s repository.

During the closing remarks, Filipe Araújo, the city’s councilman for Innovation and Environment, praised the “excellent work” developed by the organization. “This space reflects you because you give the maximum in what you do”, added the city’s councilman, congratulating the team on their outstanding effort. He also pointed out that “the dynamic that Porto has is dependent of you and the ecosystem that you created”, strengthening the citizens’ role in the development of Porto.

“We are a technological city. We created ScaleUp Porto to show that this is a growing city. It must be at your disposal and it needs to be connected with the development of a technological city and we are aware of our role. Congratulations to all who participated. You are the ones who make the city.”

The competition was born in 2014 and is organized by former students of the University of Porto, in collaboration with AlumniEI-FEUP and in partnership with FEUP and Porto City Hall.

Review here the ScaleUp article’ about Porto Summer of Code

Masterclass: Evolving a Business Strategy – From Platform to Experiences

Movvo closes a €5,5M investment round

Founded in 2009 by 3 researchers - Roberto Ugo, Suzy Vasconcelos and Diana Almeida - Movvo has…