TECH TUESDAY: Demystifying CDN – An Akamai experience and how it can leverage your origin infrastructure with Switch Digital 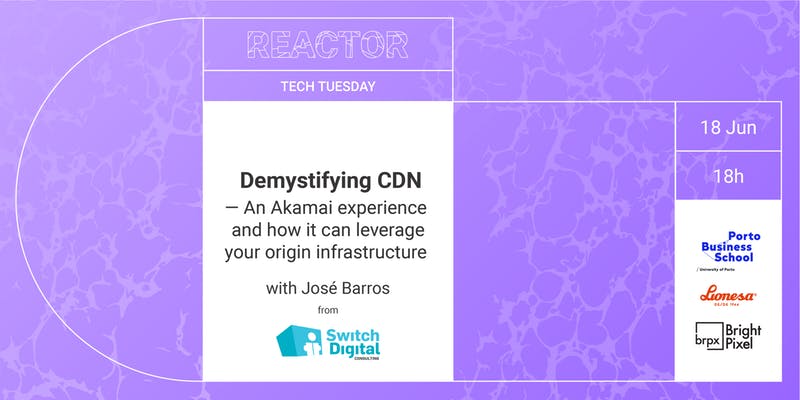 CDN stands for Content Delivery Network and is commonly a large network of edge servers. It all started to replicate data across this network to be closer to the end-users.

Soon it started to delivery other services, not only to leverage performance, but also to set up a security perimeter further from the origin where all app and business logic is.

We’ll start to briefly talk about origin infrastructure and some basic security measures and move to the delivery of the application content to the end-users, aiming security while leveraging performance as well.

Some real case scenarios will be presented in detail and show what is done on both sides, infrastructure and CDN, in order to achieve the best end-user experience, boosting sales and ROI.

José Barros, sometimes nicknamed “Programmer Physicist”, was in 1996, during his degree in Physics at the University of Porto, that he began his connection to the cyber world. In early 1997 he made his first paid website and since then the Internet has always been a constant in his academic and professional life. He left programming in 2008 when he was invited to work with Akamai: the largest Content Delivery Network (CDN).

His knowledge of the Internet and how it works has taken a qualitative and quantitative leap. He then worked with various government agencies and large European companies. During this period, he helped these entities to continue their online presence, not only at the national level, but worldwide, always aiming at the security of their applications and their contents.

He’s currently dedicated to his latest professional project, the Switch Digital, whose objective is to offer solutions to customers with a strong growth in web services, giving advice and assisting in the implementation of Cloud architectures, with a permanent focus on security, not neglecting performance.

This event is FREE to attend, but you have to register yourself first.

Bring a Friend and see you there!